As wildfires continue to spread throughout the Golden State, firefighters are working tirelessly around the clock to contain them. It’s exhausting, dangerous, and fearsome work, but these brave responders are fighting day and night to keep everyone else safe.

There is no doubt that these brave few continuously remain in our thoughts and prayers as they fight to contain the raging flames. While the task is certainly daunting, it is the small things, like the support of 2-year-old Golden Retriever Kerith that is making the difference and raising the morale of many of these men and women. 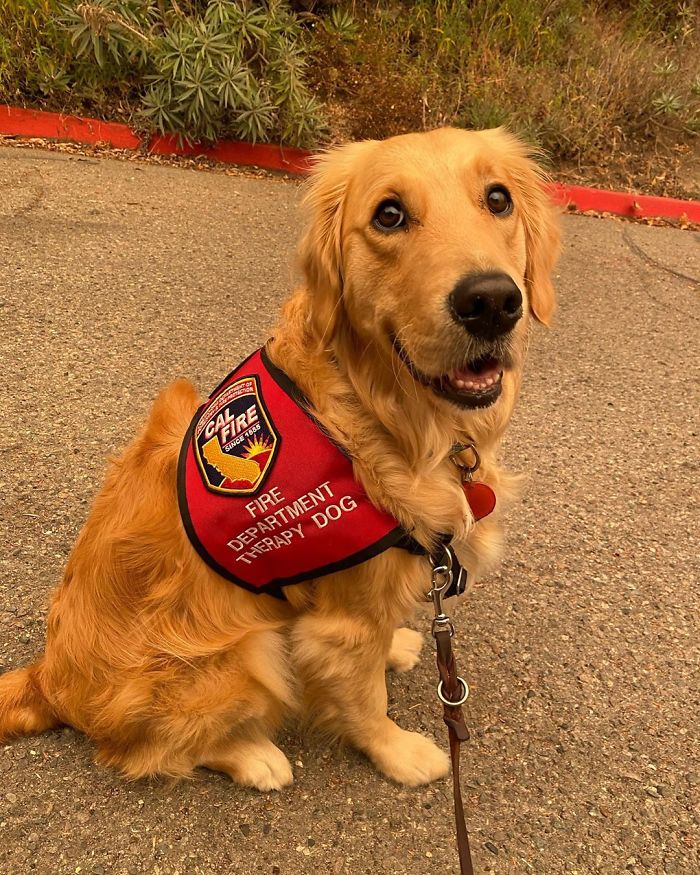 Now trained as a certified therapy dog, Kerith’s role is just as important as those fighting the flames. Kerith’s owner Heidi Carman explained to the media that she was originally trained to be a guide for the visually impaired.

However, due to her naturally affectionate and bubbly temperament, she switched career paths when Carman realized how well she interacted with people.

“It was clear to me from an early age that she would be an excellent therapy dog because of her love and devotion to people,” Heidi told local media. 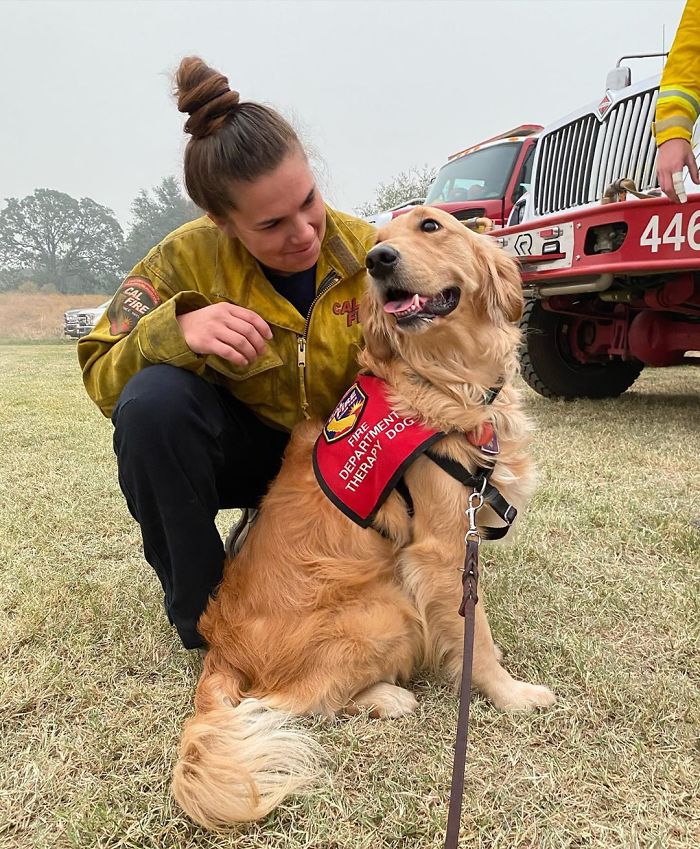 After rigorous training at California-based organization, Pet partners, Kerith began working at the emergency department of her local hospital.

There she would visit patients, families, and staff, never failing to put a smile on the faces of those she met. 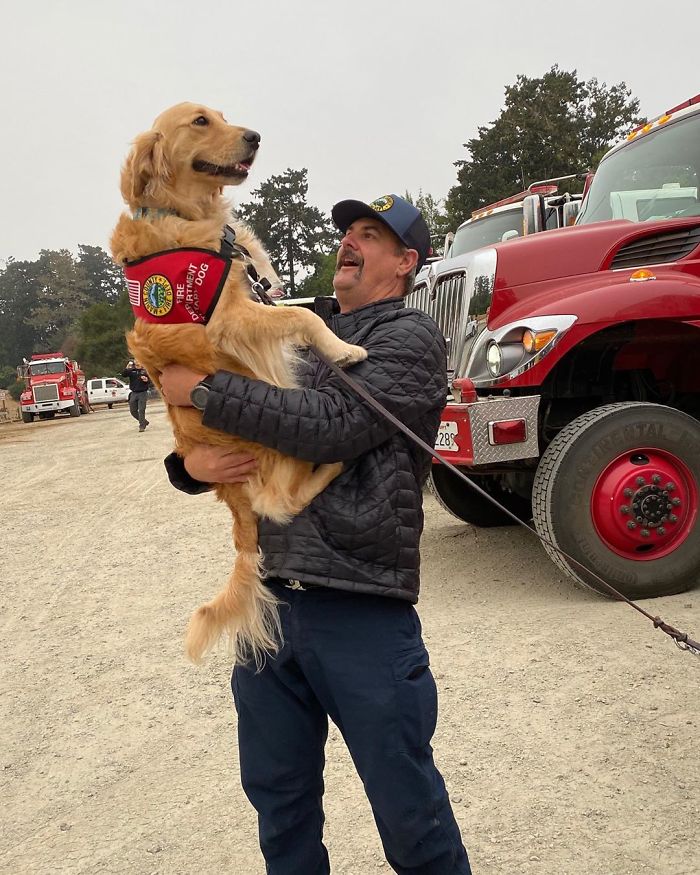 But after the wildfires began Kerith started spending more time with those who were charged with containing the fires.

Heidi describes Kerith’s first encounter with the firefighters as “love at first sight” so much so that, soon after their first meeting, the fire department personally requested that Kerith pay a visit to some of their stations. 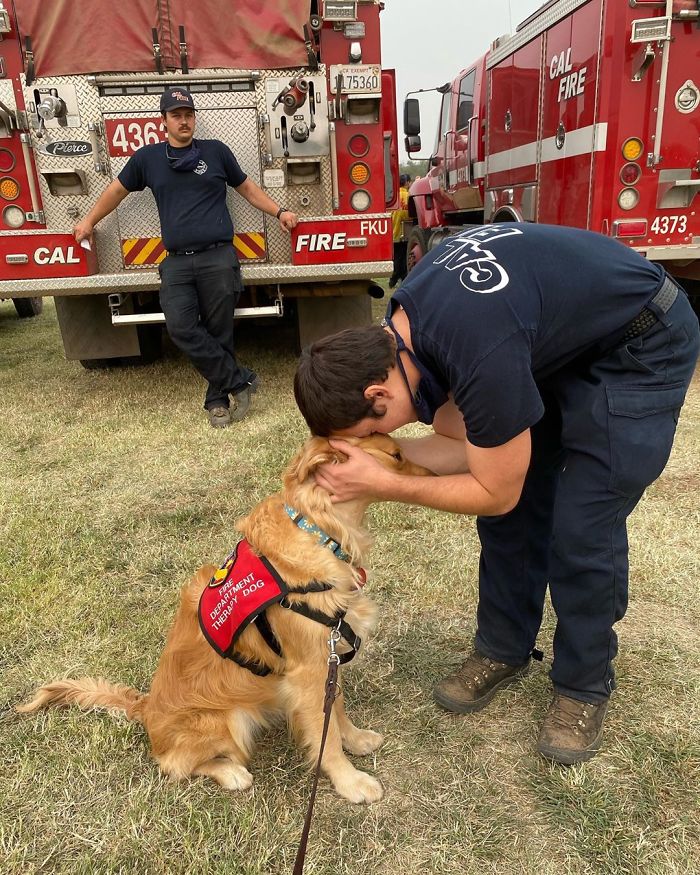 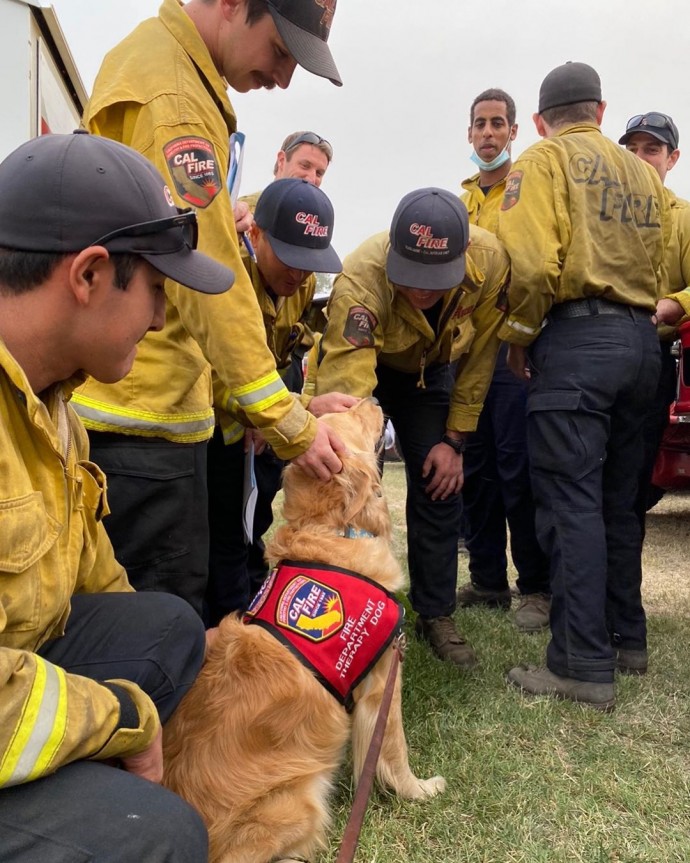 She was an immediate hit with the Firefighters and continued to visit on a regular basis. However, as the fire’s continued to spread, the demand on the fire department only increased and soon Kerith began to visit the firefighters on duty.

And it sure was needed! Her love and support have made the world of difference, specifically at the woodwork fire and creek fire base camps, two of the most affected areas. 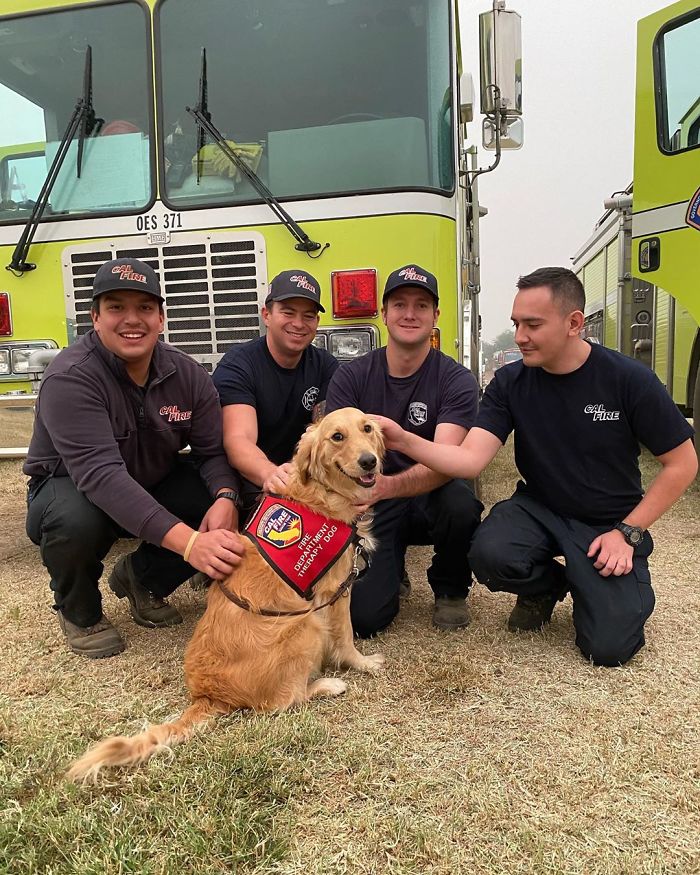 A normal day on the job starts early for Heidi and Kerith, they arrive at the camps as early as 6 am just as the firefighters are having their breakfast.

She then spends the morning giving out cuddles and kisses, making sure to collect as many belly rubs as possible before the firefighter begin their 24-hour shifts. 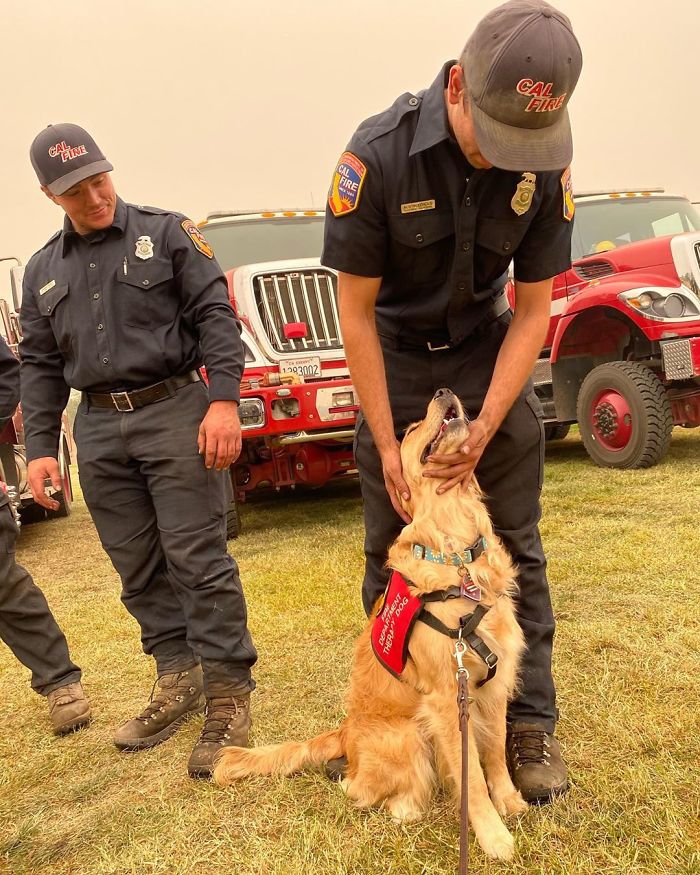 But it is Kerith’s uncanny ability to show empathy and match other people’s energy that makes her really stand out as a therapy dog. 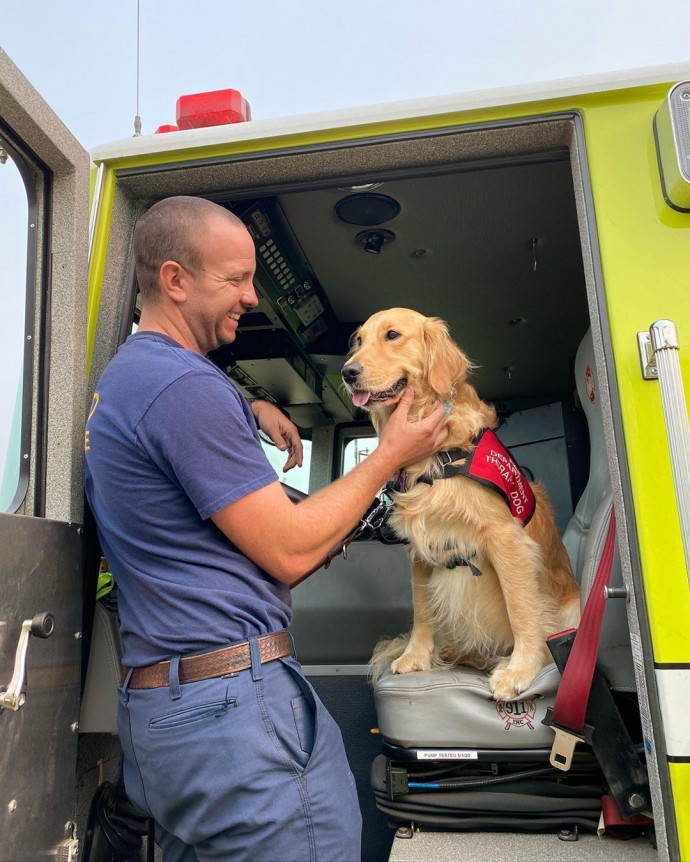 This is not surprising at all considering that she’s a Golden Retriever. A breed that is famed for its ability to be emotionally supportive. 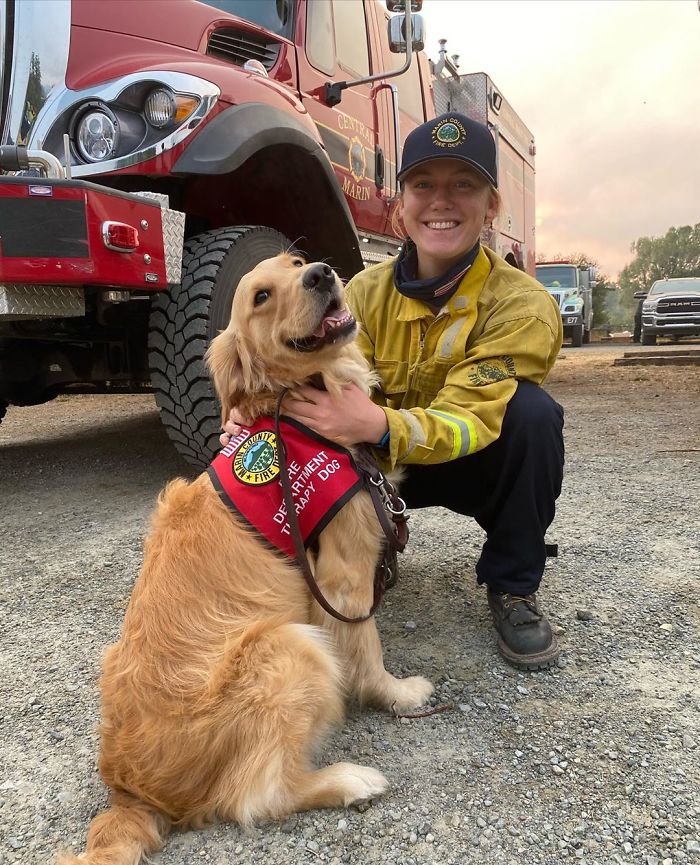 Either way, Kerith is one special pooch, who is doing more than she‘ll ever understand to lift the spirits of those who needed it the most. 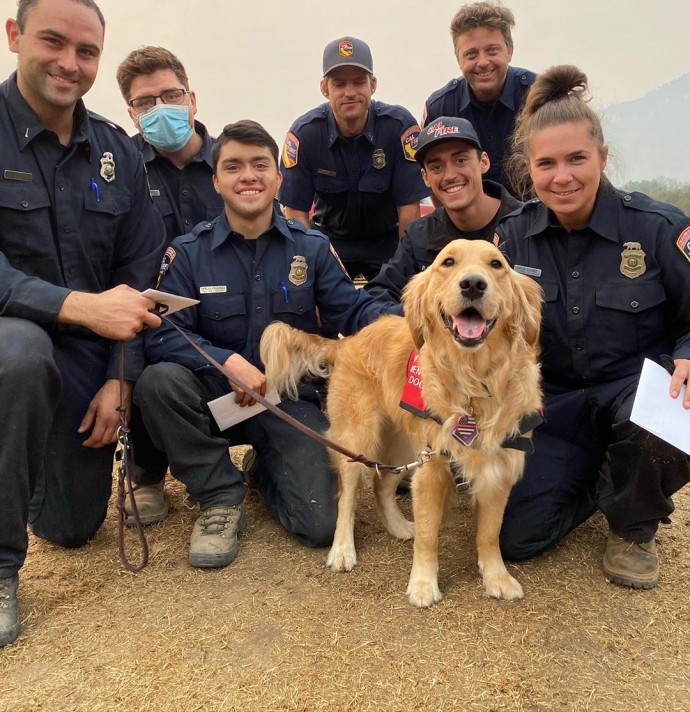 Therapy dogs are so important, and it’s great they’re out there supporting our nation’s heroes. 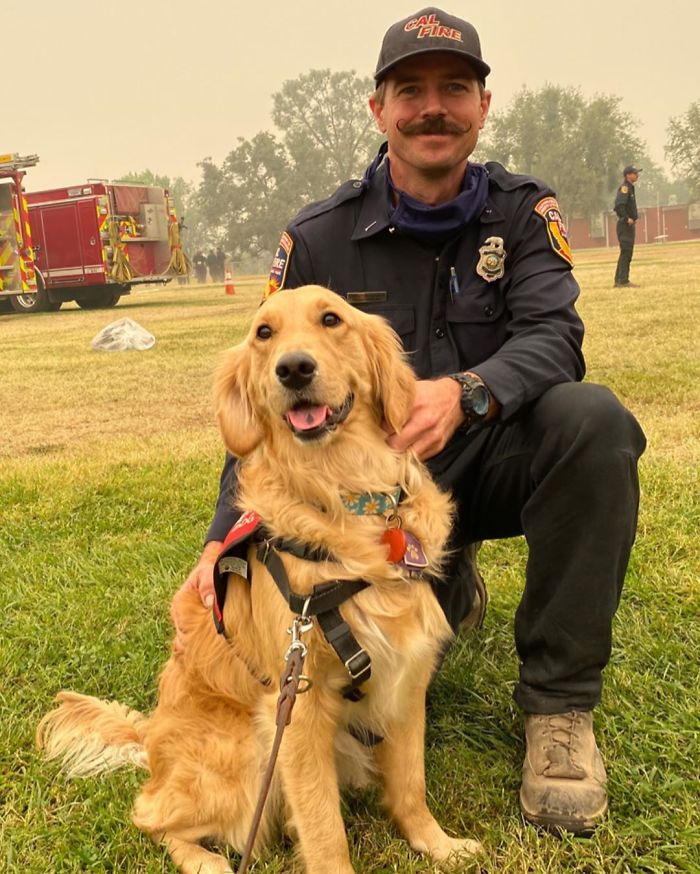 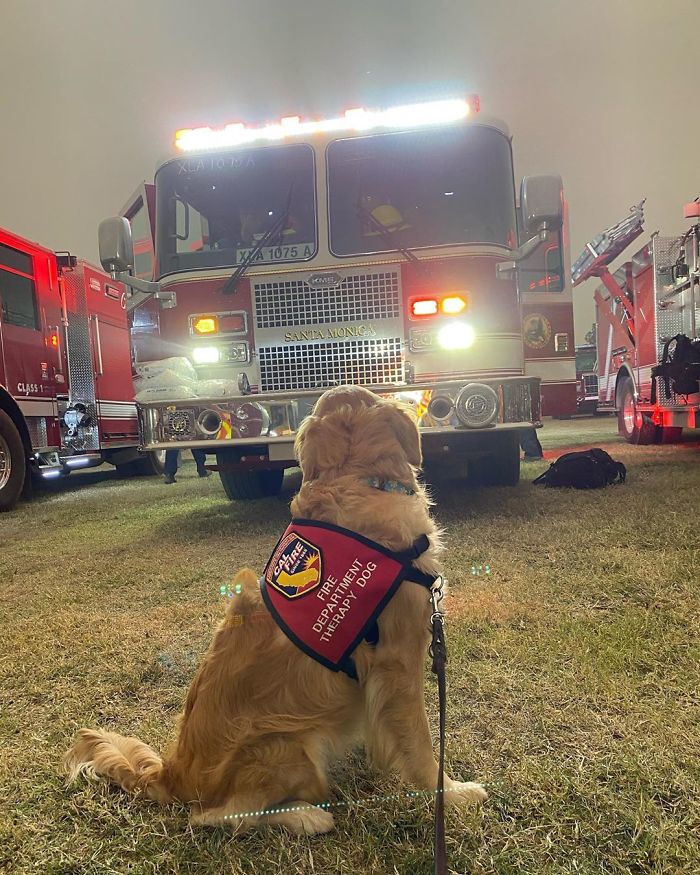